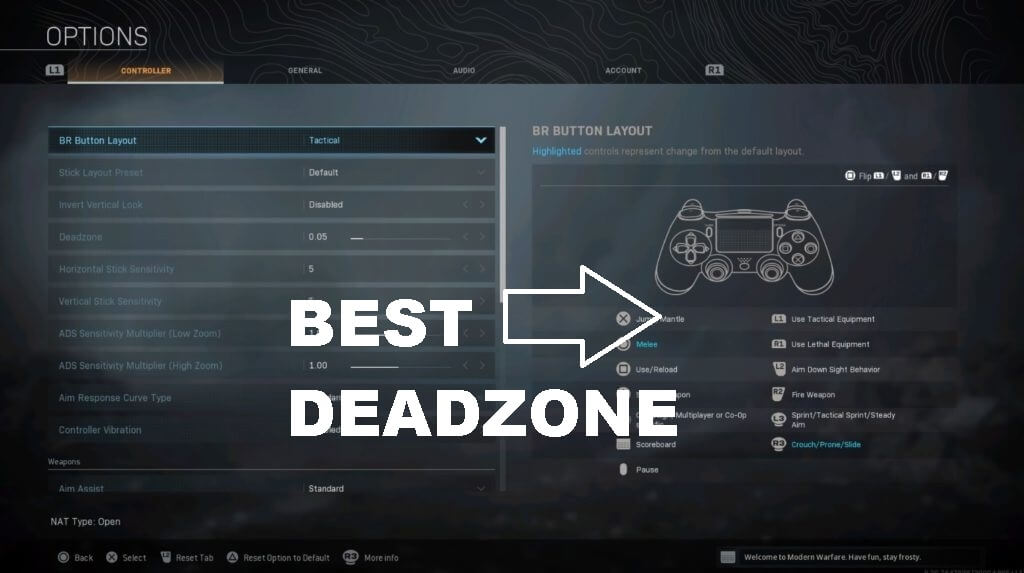 If your Aim moves on it own or if your car started steering left or right without even touching the thumbstick then you probably have stick drift and that can be solved by Deadzone settings.

Deadzone is the area around thumbstick which determines how far you have to move thumbstick to register any movement in-game. Deadzones are in-game features to solve the issue of stick drift in older controllers which is done by basically disabling the area where the unnecessary movements happen without touching the stick.

But in some cases, the stick drift is too big and creating too big of a deadzone will make the game unplayable.

Deadzone Is The Pro Strat

Deadzone is that type of setting that most of the players don’t even notice it exists until their first 100 hours of gameplay.

Deadzone is the area where we can disable the sensors to respond to any movements. We have to take the controller stick outside the zone to move in-game which prevents any accidental touches.

Every pro has a different Deadzone setting so don’t go copying them because there is a specific one for everyone.

So what pros like in deadzone is the ability to limit the area of movement. If you have too low of deadzone then your Aim can get a little shaky and not to mention accidental touches and if it is too high then it will be very difficult for a player to make quick adjustments.

How they decide what is best suitable is by playing the game or tracking the aim by flicking the aim from right to left on targets head. If your aim didn’t reach the head then you probably need to reduce the deazone or if your aim went too much to the left then try bumping it a little.

Best deadzone also depends on game mechanics, for example, Fortnite. In Fortnite, you need to build more than shooting plus you have to aim 360 degrees so having a low deadzone is probably good but too little of deadzone then your builds will be everywhere.

Is Higher or Lower Deadzone Better?

What Game you playing? and What is your playstyle?

Games like Fortnite, Apex and PUBG needs constant movement and aim in every direction so Lower deadzone is better in these games.

Lower or small deadzone means that the player has to make little movements to cover an area. This makes the movements very responsive and snappier. It allows the player to aim quicker and switch to another player easily.

But there is a downside to having low deadzone, because of this smooth transitions and easy manoeuvring you lose accuracy and the best way to counter that problem is to start with deadzone at middle and try to fiddle down and up your deadzone and to build muscle memory with the high sensitivity.

On the other hand games like Rainbow Six Seige needs Higher Deadzone for better stability and accuracy.

Now, some of my friends love to have low deadzone in rainbow six siege because they like to flick and say they have better reflexes and that proves my second point.

Play-style of a player also determines the optimal deadzone for the game. I like to have higher deadzone because I want to have a precise aim but some like to run and aim like a mad lad.

Higher deadzone means there will be a higher non-responsive zone, so less unneeded movements and more steady aiming. In a game like Six Seige, you need to shoot at medium range and getting that headshot can be very useful.

Aiming is not the only issue that Deadzone solves.

Now, what do I mean by accidental touches? When we go more competitive we learn new techniques like Claw grips and sometimes new bindings like we all did in fortnite or now in Rocket league.

In this consistent need for faster movements and button-mashing, we often by mistake push the stick in the wrong direction. This is accidental touches and you don’t want it to happen between your ranking match.

This is why pros use deadzone. By limiting the response zone just by a little like 0.3 we can reduce the accidental touches. Now if you accidentally moved the analog stick it will not be registered by the sensors because you have to intensionally push it outside the zone.

Another use of deadzone which is also the reason why most of the game have this feature is to fix the stick drift. Stick drift is a huge issue and I’m not even surprised if you are here because of stick drift so..

What Is Stick Drift?

This will be a small introduction about stick drift but if you want to know more about this issue then this might help:-

But long story short it is the random unwanted drifting of your aim or steering of your car without even touching your thumbstick is Stick Drift. It happens because of these two main reasons:-

Stick drift is a technical issue and it may be huge on your controller. Deadzone solves the stick drift by limiting the area for sensors to react but if stick drift is too big then creating a bigger deadzone will increase your issues.

What Should I Set My Deadzone To?

Finding the ideal deadzone is pretty easy. Obviously, the perfect setting would be different for everyone and some might tap into the reality that their stick drift is too much to handle but let’s give it a try.

Perfect Deadzone setting can be achieved by following these steps:-

Bumping Up the Horizontal and Vertical sensitivity to max will maximize any stick drift that we might have missed in low sensitivity. Also, change your response curve to linear because mostly the stick drift happens in linear.

Most of the time there’s still a little stick drift left so to confirm keep the crosshair on a sharp edge or a dot if it still moves and if it does then increase one more.

This will be a perfect Deadzone setting according to your controller. This will solve the stick drift problem.

Remember different games needs different sensitivity. You have to change the settings of each game according to the skills it demands.

Just Remember that after finding your Ideal Daedzone you might not feel comfortable with the old sensitivity.

But muscle memory will kick in and deadzone is something important to consider if you want to improve in your game.