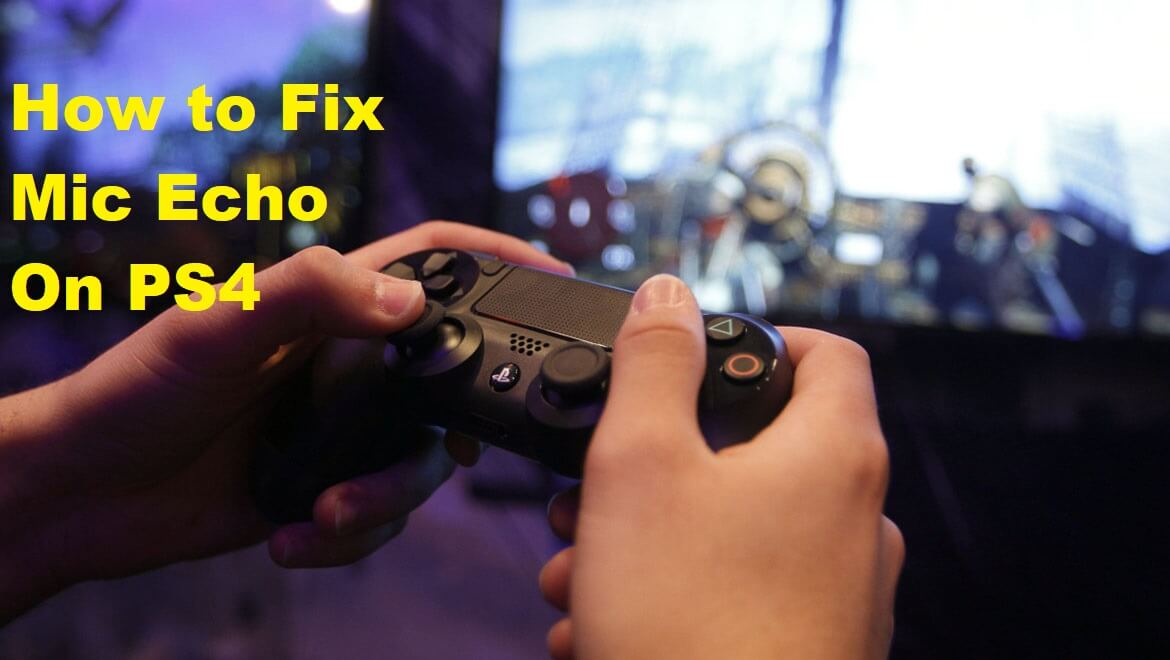 This is a very common issue where people in voice chat hear you talk twice and there is a very simple reason and an even simpler Fix to Mic echo in PS4.

Mic echoes in PS4 because the sensitivity of the Mic is very High. Microphone hears the sound from headphones and it gets stuck in a loop. To fix Mic echo on PS4 go to settings > Devices > Audio Devices > Adjust Microphone level to optimised so that input volume touches Good.

Perfect Microphone Level for your Headphones

Microphone level controls the amount of sound your mic hears, lower it too much and you have a different issue.

When you are in the Adjust Microphone Level setting you will notice an Input Volume bar which shows the intensity of your mic.

If it’s under Too Low then increase and if it’s Too High then decrease. You can move the Microphone level with the Left Analog stick on you PS4 / PS5 controller.

This is how you adjust microphone level on you PlayStation, This will fix the mic echo and also unwanted noises like a fan in the background.

This process works for consoles so an Xbox player can also set it’s Mic sensitivity to optimised level to fix Mic echo. Here we talked all the ways to solve Mic echo in Xbox because there is more than just one way.

Audio output settings are more like tips and tricks to improve the experience but adjusting the headphone output setting will fix the Mic Echo.

Here are the steps to change Audio Output Settings.

The Bitstream is basically a modern way of audio output, the surround sound is much better any many more features so its better to use Bitstream over Linear.

If you want to know which one works for you, Bitstream or Linear? Check this YouTube video.

2.Issues with your headphone!

a. The Connector is Leaking

This is a little technical but I will easy it as much as I can. The connector of the headset has 4 Signals – Audio left, Audio right, Microphone, ground.

Each arrow shows one signal, we only need to know this much about the connector.

The mic echos in here, PS4 leaks the audio from an audio signal to microphone signal (NOT in the microphone and headphone but in the Audio signal part and Microphone part in the metal tip of the connector).

The connector leaks audio between Audio Left/ right and Microphone signal and this all happens in the metal tip of the connector.

This issue enhances when the other people also have the same problem, so if you felt that the mic echo increases as the people in voice chat on PS4 increases then this will Fix the Mic Echo.

b. Unplug and Re-plug your Headset

This one is quite obvious and I am sure that most of you have already tried this. But if you haven’t, then you should do this now.

Unplug your Headset, then plug it in again. And don’t forget to clean the jack with a clean cloth.

c. Test your headset with a different controller

This is the best way to know whether the problem is with your PS4 or your headset.

You can do the same to verify whether your headset is faulty or not.

3. External Sound can also cause Mic Echo on PS4

The main reason why the mic echos are because the microphone either catches the vibration or the sound from the audio output source.

But it’s not necessary that the loop is always between microphone and headphone.

a. Lower your TV volume.

I always feel like my brother has to watch TV whenever I have to play games with my friends. And we always fight over it. He doesn’t want to lower the TV volume even if he is sitting less than 6m away from the TV.

If you also have a little brother, then make sure to ask him to lower the volume.

Here the situation is same, Mic picks up the sound from your TV and loops it in the Voice chat. This is also a very common mistake, if it’s you then this will fix the Mic echo.

b. Turn Off the Camera.

If anyone in your party has a camera and is using it then ask them to turn off the camera. The camera mic picks up the audio and relays back to the voice chat.

Lowering the volume won’t help so turn off the mic and use the headphones. The audio bleeding will decrease a little but won’t stop.

There was a update specially for Mic Echo, the software can also create some issue. Update your PS4 to the latest version.

This doesn’t sound so big but trust me this a Reddit verified solution and people over there were happy with the fixed mic and no echo.

This will fix your Mic Echo on PS4. Remember mic echo increases with the number of party member so either change your Headset or your friends, your choice!

PS4 is not new to issues and stick drift is a big one. This is how you can solve Stick for Free in a few minutes.