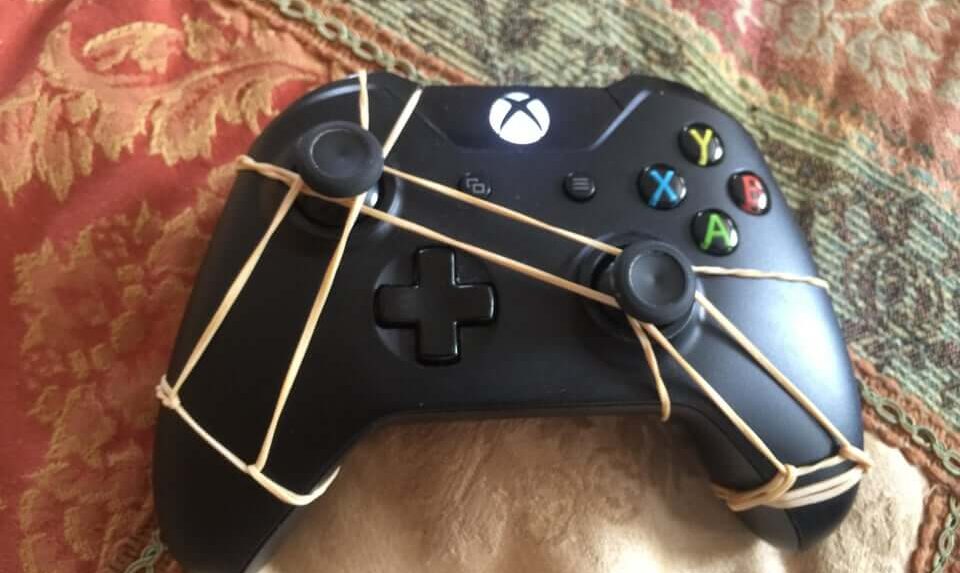 Stick Drift is that truth that everyone has to face and it happened to me four times. So I would consider myself a pro stick drifter even though that sounds a little unlucky and sad. But this time I did my research and found the main culprits for stick drifts.

Why Potentiometer is the main culprit?

Well to explain this without going too much into the technical details ” Each potentiometer registers the movement on each plain”. SO there are two potentiometers for each analog stick.

Metal disk in the above images is the potentiometer. The colour is a little bit pale because it is used and a new one looks like silver. These potentiometers are inside the green flaps in the next image. As you can see there are two green slots to hold two potentiometers.

Do to movement dust and moister gets stuck inside these which might create an issue and cleaning them can solve your problem but the best way to fix the stick drift is to remove and replace the potentiometer.

Now its not necessary to open your controller and void your warranty. You can do the old school trick and there is a better way of doing that which we are going cover next.

How do I fix my controller drift without opening it?

If your controller is new and you don’t want to rip open it that’s understandable. There is a popular trick for that, we have using it since the days of Nintendo.

Most of stick drift issues in new controllers occurs because of dust particles inside the analog stick.

Now just blowing inside the joystick can make the situation even worse as it can push more dust particles inside it. The best way to fix the stick drift is by applying some Isopropyl Alcohol on the stick.

Isopropyl alcohol is known for its cleaning capacity so don’t worry it will clean the dust on your stick.

Now take few drops ( just two drops would be fine ) of alcohol and rotate the joystick. Make sure it spreads perfectly and then blow the joystick. This will remove the dust and allow the stick to move easily. Dust pushes the stick which causes the unwanted movements.

Do this and see if it fixes your stick drift. If it doesn’t then that’s because the thing responsible for movement register is either dirty or faulty

Now if cleaning the analog stick didn’t fix your controller then you can take further steps because potentiometer is the reason for stick drifts.

There will be specific guides for both PS4 and Xbox Controllers with a video from the professionals on YouTube. I’ll also be covering the procedure step wise so that you can have it on a single page.

These steps are pretty easy but still be careful because one hard pull and you can damage your controller so be sure and warning this will void the warranty.

But if your controller is old and you don’t want to spend $60 on it then you can fix it for under $1- $2. A potentiometer on AliExpress costs around $2 max.

In fact if you decided to buy a new one then exchanging and trying something new on your spare controller wont hurt. This will be fun and if it works then you saved money and

How To Fix Stick Drift on PS4

Now, this was the best guide to open and clean Dualshock 4’s and will help you in every aspect. There is some difference in the old and newer models but this guy explained everything from what you see here and what you might to fix stick drift issues.

This video is necessary because visual representation of what you are doing for the first time helps a lot.

Down are the step is you need them on a single page after watching the video, this will make work easier for some after understanding the procedure or rechecking if something went wrong

How To Fix Stick Drift on PS4

Step 1: Unscrew the 4 little screws on the back and gently separate the controller.

Step 2: Don’t pull too hard while separating because there is a ribbon connecting them both. Gently pull the blue tab that will pull out the ribbon separating them.

Step 3: Separate the battery by pulling the connector out and then snap out the battery board as shown in the video.

Step 4: Disconnect the cable at the top right by either pulling or by opening the clamp depending the version of your controller.

Step 6: After removing the green board you’ll see the board connected to the analog stick. Clean every dust on it.

Step 7: remove the analog sticks by pulling it out and you see some familiar green boxes if you read about the potentiometer above.

Step 8: Snap Open the green tabs that holds the potentiometer. They are tightly locked so you will be using a little force. Be careful because potentiometer is very soft and even a little bend will ruin your day ( unless you are here to replace it then you can chew on it while doing the rest of the work)

Put the potentiometer back the right way. The video shows how should it go in. Then put everything back.

Putting everything back is easier and some buttons might have fallen so watch the video how to put all back together, some stuff like putting L and R pads needs a specific way so watching the video is much better option.

How to fix stick drift on Xbox

Both the video guides are very professional and clean so there won’t be any issue solving stick drift. But changing potentiometer on Xbox is harder than PS4 so be patient. It is also very complicated and fragile so be aware of any thin wires.

The screws on the controller are hidden to make it aesthetically pleasing. One behind the sticker in the battery compartment and 4 behind the removable plastics on the handles

Again, below the video guide, there will be a step by step guide if you want to recheck or see all in a one go.

How To Fix Stick Drift On Xbox Controllers.

Step 1: Unscrew the 5 screws on the controller. They are hidden, One is behind the middle of the sticker if you push it in it will tear. The rest 4 are behind the removable plastic panels on each side. Watch the first video for visual representation.

Step 2: Take off the front panel after unscrewing and pull out the rubber sticks.

Step 3: Hold the insides of the controller from the left. Thumb on the motor because it is loose and you don’t want it to fall off. Pull it out this will separate the part from the back panel.

Step 4: He taped the motors so that they don’t move which a very good idea so do that because the motors are very heavy and the wire connected to them is very thin, you know the rest.

Step 5: Now flip the controller and you will see a green circuit board. we need to remove the top circuit board to clean the potentiometer.

Step 7: After unscrewing, pull out the circuit board and do it slowly because there are few wires connecting board and motor.

Step 8: Now cleaning or removing the potentiometer is a tedious task because the wires don’t let us open the whole board and that restricts the space to the potentiometer. If you can solder the wires back then do it because it will make your work easier else just follow the next steps.

Step 9: Very carefully pull and flip the board be careful of the wires and other stuff. If you did it properly then you will see two boxes with green flaps and a smile on your face.

Step 10: Open the flaps. Note that the flaps might be hard to open so apply force needed but not too much. Pull the potentiometer out gently and keep it aside.

Step 12: Be careful with the potentiometer. watch the video on time stamp 5:36 for visual representation.

Step 13: Now reverse the steps flip the board > screw the two screws behind the motors > Put the rubber analog sticks back > front panel > screw the 5 screws back.

This will help you fix that stick drift on you Xbox controller.

So this is how you fix stick drifts on controllers. Decide it if you want to replace all 4 potentiometers or just the one with the issue. Either way this will work and if you decided on buying a new controller and also fixing it then you’ll have one extra working controller at the end of the day.

One thought on “How To Fix Stick Drift In Few Minutes”