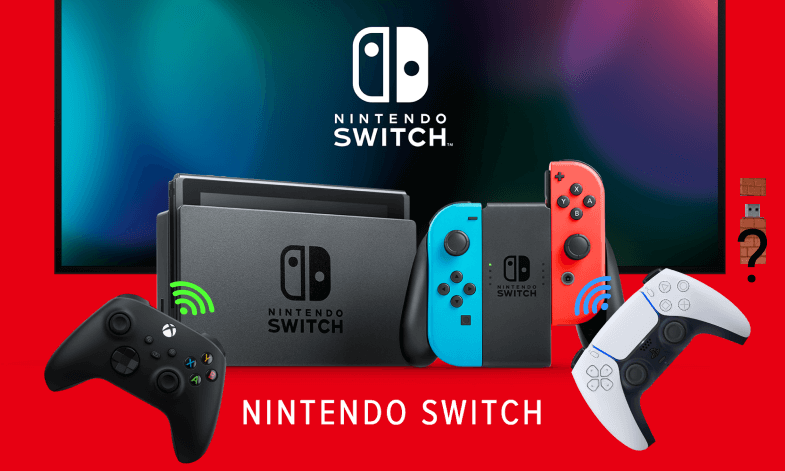 So a question I hear a lot when I am talking to my friends about the Nintendo switch is that why can’t you use it or how can you use your Xbox controller or even PlayStation controller with the Nintendo switch. This is a reasonable question because not everyone wants to invest more into Pro controllers or that might be that you don’t like how the joycon feels.

And if you already have one spare Xbox/PlayStation controller sitting in your room as I do then it’s better to use it and the simplest and fastest way that I have found is by using an adapter.

So how to use Xbox/PlayStation controller on Nintendo switch? Plug the adapter with USB-C cable to Nintendo switch or directly into dock if using in dock mode. Press the button for a few seconds so that the led flashes faster and press the sync button on your controller and hold it near the adapter. Then press LB + RB together to sync.

That is how generally you would sync with any adapter with any controller. But few steps might change or add depending on the adapter and its process of syncing.

So, You can either read the instructions that come with the adapter, or even better you can buy these two I’m recommending and follow the steps below.

These are the best/ most common adapters everyone’s using. Everyone is recommending these two adapters because of their longevity, functions, and in the case of the second one aesthetics.

I’ll be further explaining how to use both of them and make it easy for you to decide which one is good for you.

But still, if you want to go for 8Bitdo then go ahead, aesthetics are important and they both will connect to the Xbox controller easily.

8Bitdo has a unique design as you can see the whole design is based on the old nostalgic 8bit Nintendo vibe. So it will definitely look like it’s a Nintendo switch accessory.

Apart from that, there is nothing special about it. You just need to unbox it and plug it. It’s that simple.

So to use 8Bitdo adapter to connect the Xbox controller with Nintendo Switch you need to do these steps:–

This is only a Bluetooth Nintendo switch to controller adaptor with no feature and anything. Some people prefer it because of its design so go for 8bitdo if you think that’s important for you.

Now let’s talk about the big boy, MAYFLASH Magic-NS adapter. Almost 8 out of 10 will recommend you to buy this one because of its popularity.

You need to use the correct LED light while pairing your controller with a Nintendo switch. So this is an extra step.

There is a New Adapter by MAYFLASH, Magic-S PRO wireless adapter on amazon. I didn’t get a chance to use this one but if you want you can go for the new model.

So to connect MAYFLASH MAgic-NS with Your controller you need to follow these steps:-

3. After choosing the right LED color just set the controller to pairing mode and hold it near the adapter and it will pair with the controller automatically.

4. You might need to Hold LB + RB if this screen appears. So do it to sync it with Nintendo switch

Doing just that will sync your controller with Nintendo switch in seconds.

And that’s it, It is easy to connect Nintendo Switch with Xbox and PlayStation controller and yes I know that it was a little bit complicated but that is what we are here for, to solve technical queries.