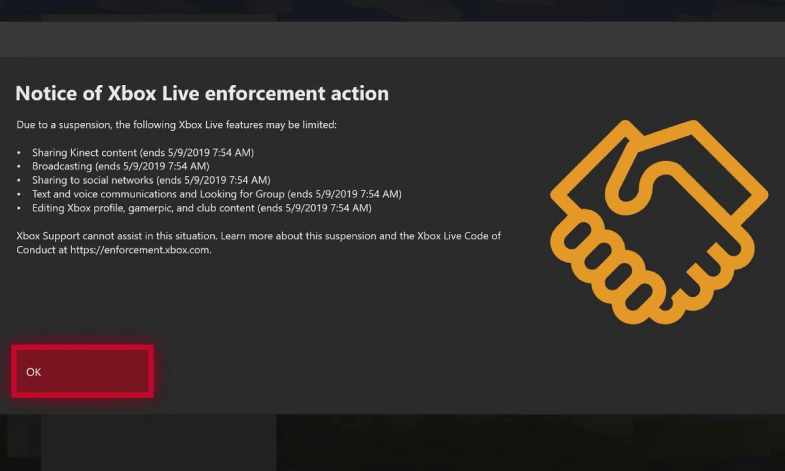 A lot of Xbox users get banned from using the XBOX live services due to some reasons which they are unaware of and also unaware of how long will this last.

No need to worry as we have got you covered with all the information related to Xbox live enforcement like reasons for getting banned, how long does the live enforcement lasts, How to remove the ban or reduce the duration of the ban, etc. Let’s get straight into the topic without further ado.

Does the question arise that How long does the XBOX live enforcement last? And the answer to this is that this completely depends on the ban type that you got and depending on that it can vary from 24 hours to 7 days to 14 days to permanent in which the Xbox user will not be able to use Xbox live services and other things as well and that will depend on the ban type.

This is one of the fixes that has been written in a quick-read format and if you want the complete details, stay tuned till the end of this blog as there’s a lot to talk about and to be covered.

Let’s discuss this in a detailed step-by-step guide of how to recognize the ban type and how to get unbanned from it, etc. So, you’ll be completely sure how to tackle such a situation like anything. Let’s dig in without straight further ado.

Types of Suspensions and bans.

Let’s first discuss the meaning of the ban that you are particularly facing. Here are some common ban types that XBOX gamers usually face.

And this leads us to some other types of bans which are as follows:-

I am hoping that you are clear with what type of ban or suspension is bothering you to not use the Xbox live services and that brings us to our next point which is “the reasons why your account gets suspended”.

Here are some reasons why your account gets suspended and the few things you might not know that you should avoid to not get suspended or banned. Here are those reasons and things to avoid.

Safety concerns as the name suggest the safety of everyone whosoever is connected to the community or platform. It includes Violence, Hateful content, Terrorism, Self-harm, Child Exploitation, Abuse and harassment, and any other thing that is not good for the platform or community.

So, it is always better to keep a check on what you are typing or doing so that you don’t get into any such suspension or ban due to safety concerns.

Few gamers faced this situation unintentionally just because they were unaware of the fact that you can get banned or suspended just by typing something which is not good for the community or the platform.

Although such suspensions or bans may not last long. However, you never know when will community guidelines change and result in longer days of suspensions or getting banned for a longer duration.

In both cases, privacy tends to get interrupted which is against the community guidelines on any platform.

So, it is better to protect yourself from such activities and better not to get banned or get suspended on Xbox by using Xbox live services. Moving on to the next one.

If you fail to prove your authenticity and hence violating authenticity by any means can also lead to suspensions and bans.

Usually, spam accounts with no real identity fall under this category of Unauthentic accounts and often get banned or get suspended.

Also, these days there’s a trend of selling ace accounts and that’s the reason why the policies are getting even more strict resulting in more suspension of accounts and accounts getting banned.

Any fraudulent activity or any sort of indication can also lead to such suspensions and can get you banned. These frauds are increasing at an extreme rate so it is

Fraudulent activities such as Xbox gift card scams, etc are the reason why the guidelines are getting even more strict than before.

Beware of such fraudsters and make sure you fall into this category anyhow to avoid getting banned or suspensions.

Other reasons why Xbox users face account suspensions and bans.

Here are the reasons why Xbox users face account suspensions and bans.

If Xbox a user hasn’t paid the balance or owes some dues to Microsoft/Xbox, then there are chances that their account might get suspended or banned.

By any chance, If you are someone who somehow forgets to clear all the dues, Make sure you pay all of them within the given time to avoid getting suspended or banned from Xbox live services.

So, Make sure that there isn’t any unpaid balance and you don’t have any dues left with the account that you have with Xbox/Microsoft. Moving on to the next one.

Creating a spam account can also get you banned from Xbox-like platforms(not just Xbox live). So, beware of creating spam accounts.

If someone violates or disturbs the copyrighted or trademarked stuff from Microsoft Xbox services, then, in that case, there are chances that the account might get suspended or banned under the category of Trademark or Copyright Infringement.

Spamming includes spam bots, spam messages, etc. Basically, refers to the use of the same item or action repeatedly.

Avoid doing that just because the Xbox team is trying to make the platform or community as clean as possible so better beware of this.

There are two other things as well that fall under this category i.e Abusive behavior and Promoting Terrorist organizations.

Abusive behavior is something that we gamers encounter very often and those gamers get banned or suspended as well. However, Promoting Terrorist organizations isn’t something that we see but falls under the category of promoting hate.

Promoting Violence, Abusing, harassing, and threatening others are the things that also fall under the category of Promoting hate.

So, make sure by any chance you don’t fall under this category to avoid getting banned or suspended.

Glorifying self-harm and suicide is something that violates the community or platform guidelines. Beware of such incidents and if someone you know does that, make sure you report them.

These are the main reasons why Xbox users get banned or suspended and this leads to our next pointer i.e, How long does the Xbox live enforcement ban or suspension actually last.

Xbox live enforcement completely depends on what sort of ban did you get and against what reason. The ban duration can vary from 24 hours to 7 days to 14 days to permanent.

In easy words, The duration of your ban or suspension completely depends on how serious was the reason for getting banned or suspended.

For instance, Promoting hate can get you banned from 24 hours to permanent again depending on how serious the situation was.

Moreover, In the case of spam accounts, there are chances that you might get banned due to wrong judgment by the moderators of the platform(i.e. Live enforcement action team) and in that case, you don’t really have to worry if you aren’t the one who’s trying to go against the guidelines.

This can happen to you quite a lot of times since the guidelines are getting strict day by day. So, if you ever get into a situation like this, just try to contact the live enforcement action team and try to explain them in simpler words and get your suspension or ban reversed.

Also, In case you got banned for no real reason, You can contact the Xbox live enforcement team to get unbanned and that is our next topic to discuss. Let’s now move on to our next title i.e, How to reverse your ban or suspension.

How to get your ban or suspension reversed.

If it is something very serious, there are chances that you might not get your account back. For instance, Promoting hate, Glorifying self-harm and suicide, Promoting Violence, Abusing, harassing, and threatening others are considered in the serious case category.

So, If you got banned either by mistake or banned because of some reason that isn’t that serious then in those cases you can get your ban or suspension reversed just by contactin the live enforcement action team.

There’s a dedicated team assigned to take action against banned accounts. So, they are the responsible guys who maintain the community guidelines and moderates all the actions. Just appeal the suspension and there are chances that you might get your account back to normal.

So, If you explain to them the reason behind the suspension if you got banned without a reason or the reason that you have no idea about, in that case, you might get your suspension reversed with a warning(depending on the reason).

You can only appeal the suspension if you have:-

You can proceed to open a case review using the following steps:-

How to check the status of your case review?

If you would like to know the progress of your case review, You can check the status by logging in to the enforcement page using your suspended or banned Microsoft Account. Here’s how in step by step format:-

Here’s how you will get notified about your case:-

In easier words, How to unban yourself and review your case.

How to Unban your account and get it back to normal:-

That’s that for the topic and I am hoping that this blog will help you out in figuring out how Xbox live enforcement actually works and how to reverse it in different cases.

In case, you still couldn’t figure out the answer or couldn’t get your Xbox account back to normal, in that case, either you have made some serious mistake with your account or affected the community guidelines.

Although, We have tried to cover all the possible ways to get your Xbox account back to normal, Still if you think we missed out on something, Make sure you reach out to us via any source and give suggestions(Your feedback will be given priority.)

Also, If you face any sort of issue with any game, console, controller, or bug, let us know and we’ll get you covered with Nerfgamer. With that being said, peace out.