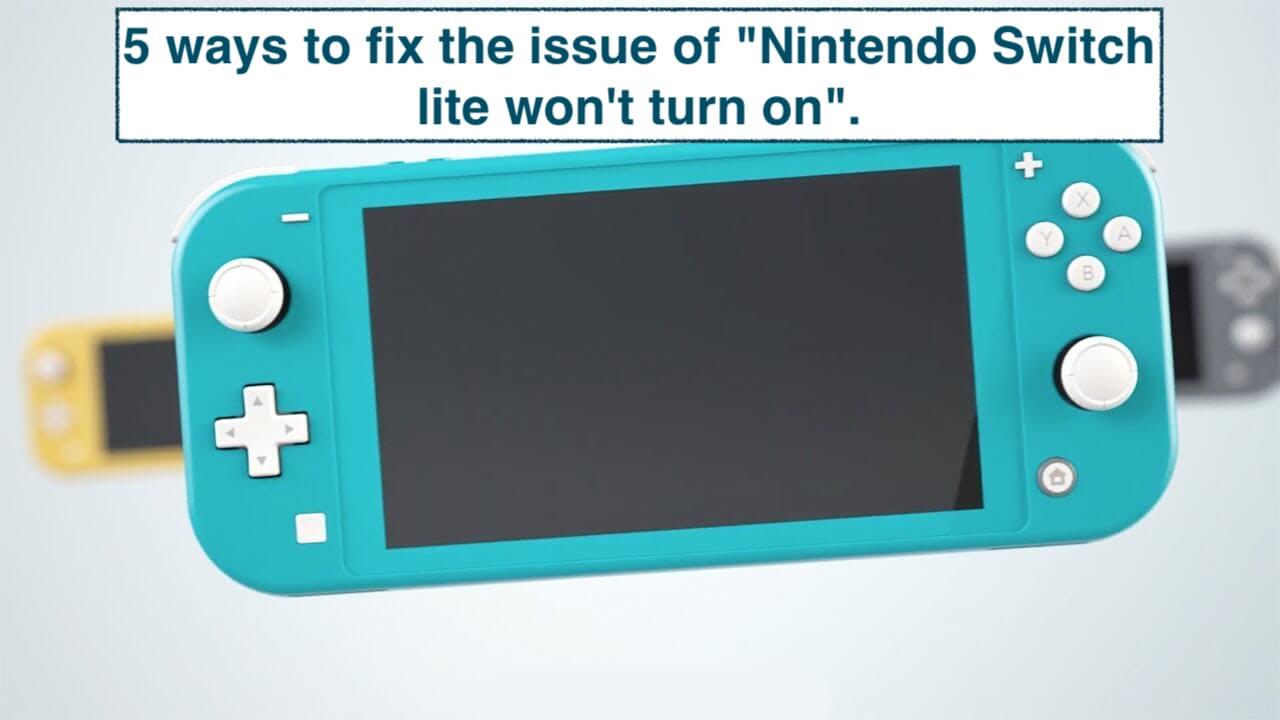 A lot of Nintendo switch lite users are facing the issue of “Nintendo switch not turning on.” Where the Nintendo Switch either doesn’t turn on or there’s a black screen that going on for a long.

Need not worry, we have the right and easy ways to fix the “Nintendo switch lite won’t turn on” issue. Here’s how.

This should work for you and if it doesn’t, Underneath is where we have covered all the other fixes and in a detailed manner.

Plus, the addition to the above-mentioned is also provided. That means there are more things that you can do alongside hard resetting the Nintendo switch lite. Let’s dig in straight on to the other fixes.

FIXES for the issue “Nintendo switch lite won’t turn on.”

Here are the fixes that you can try and one of these should definitely work for your Nintendo switch lite. First up.

Hold the power button by following these patterns:-

Make sure you Power up your Nintendo switch lite:-

Do not use a third-party USB cable and adapter as it can break or damage your Nintendo switch lite battery over time.

Charge the Nintendo switch battery for the bare minimum of 30 minutes. So, that it can turn on. After charging your Nintendo switch lite follow these power button patterns to turn your device on:-

After trying all the possible button combos of using the power button, If it still doesn’t work, try the other ways to fix the issue of the Nintendo switch not turning on or black screen and those are underneath.

Charge the battery for Long hours(24 to 30 hours).

Don’t you worry, Doing this won’t really have a bad impact on the battery? However, Do not overdo this and don’t do this very often.

If doing this doesn’t work for you, Move on to the next one.

Check your charging USB cable and the USB port.

Check if your USB cable is working fine and look inside the USB cable and look for the bent pins which are causing hindrance in making contact with the port on the Nintendo switch lite.

Try not to use the third-party USB cables to charge your device and the reason is simple is that the third-party cables aren’t as capable as the original cable that you get with the Nintendo switch.

Hence, Using third-party USB cables can lead to damaging the battery of your Nintendo switch. Moreover, not cleaning the USB ports and inside the USB cable can also cause you the same trouble.

So, Always make sure that you maintain your Nintendo switch and the accessories that you have alongside. Moving on to the next one.

Hard reset your Switch without deleting save data.

If your Nintendo switch lite is stuck on a black screen, then forcefully shut it down by holding the power button for about 12 seconds.

After you get to the Recovery mode page, Click on “Restore Factory Setting Without Deleting Save Data”. Just to make you aware that this will consume some of your time.

If Hard resetting your Nintendo switch lite doesn’t solve the problem. then, you should follow the subpart of hard resetting and that is:-

Hard reset your switch and delete the save data.

And the steps are similar to as you did in the previous part. Still for your clarification, here is how to reset the Nintendo switch lite and delete the saved data.

If your Nintendo switch lite is stuck on a black screen, then forcefully shut it down by holding the power button for about 12 seconds.

After you get to the Recovery mode page, Click on “Restore Factory Settings”. i.e, option number 3. Selecting this option will hard reset the Nintendo switch lite as well as delete the data.

Deleting the data will make sure that there isn’t any file or data that are corrupt or bothering the device.

And if still, the power button doesn’t react to your command, Then there’s a battery issue or some other internal issues. This brings us to our next fix. That is:-

If your Nintendo switch lite tends to show a black screen or fails to boot/startup then there are chances that the battery is either gone or isn’t capable of taking the load of starting up completely(that’s why black screen).

Either get your battery replaced with a new one or you can take your device to the nearest local technician who does all the work of repairing such consoles, controllers.

Or If your device is under warranty, then, try calling Nintendo’s customer care as they can help you out in getting the battery(probably for free depending on the warranty) as well as they might help you in fixing the whole problem as well.

After trying all of the above-mentioned fixes, If it still doesn’t work, try to visit the nearest Nintendo switch or call their customer care for help or for an appointment.

After all, they are the ones who made the actual product and know the best about their creation. They can take the most responsibility and on the other hand, the local technician fails to take responsibility.

So, If all the previous steps don’t help you to get the response of the power button and still fails to start up then you should definitely visit Nintendo or can consult them over a call on Nintendo’s customer care.

That’s that and hopefully, this problem of yours gets fixed, and with that said, peace out.

Button sticking on the controller is a major issue that gamers face(hardcore intense gamers majorly). Also, few gamers who press the controller buttons very rough and hard face such an issue.Most...

Continue Reading
link to 10 ways to fix "unable to start the software on Nintendo Switch".

"Unable to start software" is something that a lot of Switch users get to see while opening a game. There are some cases where Nintendo switch states such statements.Here are those cases where...