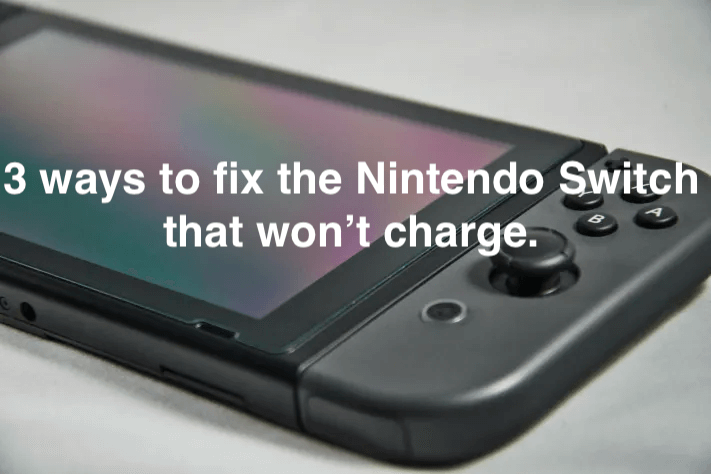 Nintendo switch not charging is a major problem that almost every Switch face at some point of using their device.

And if you’re wondering why is it happening and how to get it fixed, here we are with all the possible fixes to the issue of the Nintendo switch not charging or won’t charge. Let’s get straight into the topic.

The issue of the Nintendo switch not charging occurs due to various different reasons and one of which is this glitch where the Nintendo switch fails to charge when you have the attachments So, to make Nintendo Switch start working and charging again, Detach the Joycons, Game card, and SD card and plug in the charging cord and charge it for at least 15- 30 minutes. After that, the Nintendo switch should turn on. And if that doesn’t work, Unplug the charger, hold down the power button down for 30 seconds. Then, connect the charger back on.

Doing this should work for you in most cases but if this fails to work for you, try following the fixes and the steps that are mentioned underneath.

Here are the possible fixes for the Nintendo Switch failing to charge up or that won’t charge. First up,

Sometimes it becomes necessary to power cycle your device which refreshes the system. In order to Power cycle the Nintendo switch follow these steps:-

[Note in between:- You have to plug it in before you turn it back off. Because if your plug it in when it’s off the console will just power back on thus preventing the next stop.]

Power cycle your Nintendo Switch often leads to system refresh which is overall good for the health of the Nintendo switch.

And you can often perform this method whenever you get stuck in a similar sort of situation. Moreover, doing this can also lead to better performance if it is compromised somehow.

However, you might not face any performance boost or anything like that just because it is a matter of the device’s health. Moreover, You can power cycle in this way as well which is actually a YouTube video that is underneath.

So, you should only go for the power cycling process only when you get into such situations where the Nintendo Switch fails to respond or work.

Power cycling should be working fine to fix such an issue but if it fails to, You should try the next one.

Look for the overall power supply and the components that help the Nintendo switch to get charged up. Talking about the Power cable, Power adapter, Power socket(wall), and components such as Charging USB port C-type, Power supply chip(motherboard), Power cable’s end and etc. Let’s talk about them in detail with some pointers underneath.

Reach out to your nearest third party Repair guy.

You can reach out to your nearest third-party repair guy who deals in repairing all sorts of consoles (including Nintendo Switch of course).

That repair guy can get your Nintendo Switch fixed in no and easily as they are equally trained as the Nintendo’s technicians and repairers. So, you can consider visiting them in such a case.

However, If your Nintendo Switch is under warranty then the only option is to visit or call Nintendo’s customer care. This brings us to our next and the last point to talk about this issue.

As mentioned above, If your Nintendo Switch is new and if it is under warranty then in that case there’s no option but to visit the Nintendo’s service center or call their customer care.

And the reason is simple if your device is new and the battery is showing inefficiency at the very beginning. Moreover, The Nintendo covers other components as well that you can confirm from them over a call as well.

Do not avoid the warranty by visiting the third-party repair guy and that option is for the ones that have their Nintendo Switch out of warranty.

With that said, Hopefully, all the above-mentioned information works out in your case and you don’t face such an issue again. Peace out.