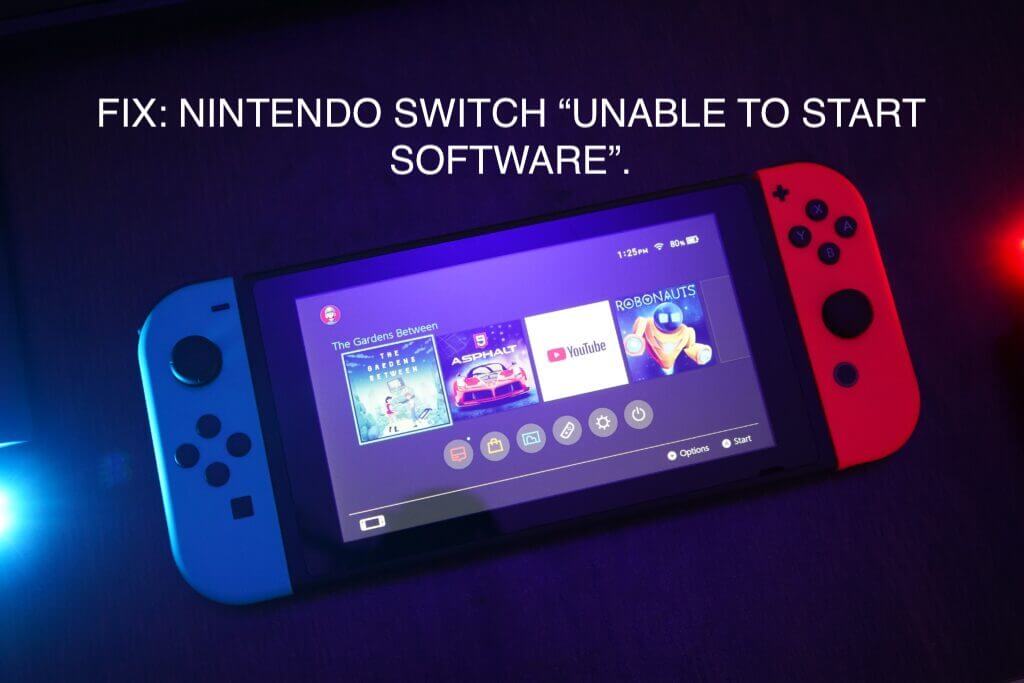 “Unable to start software” is something that a lot of Switch users get to see while opening a game. There are some cases where Nintendo switch states such statements.

Here are those cases where the Nintendo switch states “Unable to start Software”. Jumping onto the topic.

To get rid of the issue of being unable to start software on the Nintendo Switch, De-register your primary console and then register it again, and moreover, make sure that you are opening the game with the account that actually bought the game, and if that doesn’t work, go to Recovery Mode > Restore Factory setting without deleting save data. Also, you can Restore factory settings according to your preferences.

(i.e You can decide whether you want to delete the factory settings without deleting save data or without saving data according to your need).

The above-given fix is just a teaser and underneath is where you’ll find it in a detailed pattern and in case the above-given information isn’t enough for you try the fixes that are mentioned below:-

Fixes for “unable to start software”.

Here are some easy ways you can fix the issue of “Unable to start software” on the Nintendo switch.

When you don’t update the game software to its latest update, such errors are most likely to occur to you. So, it is always better to have your Nintendo switch games updated to their latest update.

Updating your Nintendo switch games to their latest updates will lead to enhancement of existing features, fixes glitches and bugs and Moreover, it adds new features for a better gameplay experience.

Go to game settings(Software settings) and there you’ll see the option of software update via the internet. However, In case, the downloadable content is unusable even after the update, re-download it from the Nintendo e-shop.

Moreover, Update your Nintendo switch as well to the latest updates if available. Doing this will ensure that there are no bugs and errors and hence no such errors showing up on the Nintendo switch.

Go to the home menu> select system settings> Scroll down and select System > System update. The system will update if there is an update available. And it will inform you if your Nintendo switch is updated. Moving on to the next one.

Make sure that you re-install the digital game using the Nintendo account that originally purchased the game and open that account only on the Nintendo switch.

Launch the game from the e-shop home menu, the whole process will ensure that the console is activated for the Nintendo account that bought the game, and also this will allow the other users to play the game in the console.

If re-installing doesn’t work in your case, try the next one.

If you are unable to access certain games on your console all of a sudden, It is always better to restart the console to refresh the system, and restarting also leads to eliminating all the possible bugs and that’s good for your device.

Bugs might act as a culprit for such errors and restarting the Nintendo Switch might fix all the bugs as it refreshes the whole system and eventually you might not get the error of “unable to start software” again.

If restarting the Nintendo Switch doesn’t work in your case, check out the next one.

Delete all the saved data from the game.

Even if you delete the game/software from the Nintendo switch, the saved data still remains.

Saved data might contain some corrupt data somehow and it is always better to delete all the files that aren’t useful to you anymore.

And to do that go to System Settings on your home screen and then scroll down you’ll see data management and then you’ll see delete save data.

Where you’ll get the option to delete the saved data from a particular game/software and then select that game and then you’ll get another two options:- 1) Delete save data(software name) and 2) Delete all save data for software.

Deleting the saved data will make sure that there isn’t any corrupt file or data to cause you problems. so in that case, I’d recommend deleting all save data for the software that causes you the issue of being unable to start on the Nintendo switch.

Check if you are trying to play a game trial

Nintendo offers game trials for some games to eligible Nintendo Accounts for a limited period of time.

If that allotted period of time had already expired, the error will eventually show up on your screen when attempting to access the game.

Search the game in the Nintendo eShop learn when the dates of the trial will be available again.

Although, it is always better to buy the game when the trial gets over, and if you think that you are most willing to get the trial whenever available, then only wait for the trial of the game.

In my opinion, you should always buy the game when you play it regularly in order to play it uninterruptedly. Moving on to the next one.

If you have encountered the error even if the Nintendo Switch is the primary console for the Nintendo Account, De-register the console and register again.

After you have de-registered your console, register the console as the primary device again in your Nintendo Account.

After that, Launch the digital game to check if the problem has been resolved.

Purchase history can be viewed by heading to the Nintendo eShop on the console. Also, you can have a look at the purchase history by accessing your Nintendo Account on the website.

Just make sure to use that account only that actually bought the game and if that doesn’t work on your particular device then try out the next one.

Check for the corrupt data

Check for corrupt data and if you have found any then try to delete it as soon as possible. You need a complete set of files/data in order to play a game and if there is corrupt data the switch won’t allow the game to be played and it will show it as incomplete data.

Incomplete data won’t let the game turn on completely and you will face such an error. An error such as ‘Unable to start software’ and to get rid of such errors, you need to check for the corrupt data.

In order to check if your Nintendo Switch has corrupt data, Go to system settings from the Home menu, that scroll down and select Data management after that select Manage Software, and last but not least you’ll get an option to Check for Corrupt data.

Once you could finally figure out if there is corrupt data that bothering your game(software), delete that particular corrupt file/data and you are good to go. Moving onto the next step.

If your SD card isn’t up to the mark or isn’t working properly then you are most likely to face such errors where your game/software won’t work.

There are 3 things that I think you can do in order to make the software/ game work when an SD card is concerned. here are those.

In case, your MicroSD card isn’t working properly then remove it and it is better to store the game in the system only by downloading it directly to the Nintendo Switch.

Here are some quality microSD cards that I personally use and work well with the Nintendo Switch:-

I personally use the Samsung’s Evo+ 256GB which I found the most value for money.

Install sig patches or correct them if you want to play pirated games on your Nintendo Switch. Playing pirated games isn’t recommended from our side.

You can install them by downloading sig patches from google(search for sig patches newest atmosphere update).

After that connect your switch to your pc and there you’ll see a folder named atmosphere, simply drop the contents of this folder onto the atmosphere folder on your MicroSD card.

You’ll most likely find such files in some forums where there is a discussion between gamers or Nintendo switch forums only.

This method isn’t recommended completely. However, you can do this if you want to play pirated games on the Nintendo Switch.

Restore the factory settings without deleting save data and use recovery mode to perform that.

Performing factory reset will make sure that there are no corrupt data left to cause errors where the software fails to work.

Go to Recovery Mode > Restore Factory setting without deleting save data. Also, you can Restore factory settings according to your preferences.

If you are someone whose device does not have any data that’s important to you then only you can choose the option where you will restore factory settings and the Nintendo Switch will delete all the saved data.

However, Deleting the saved data will have higher chances that this will fix all the bugs and errors than not deleting it. So, If you can delete the saved data, just delete it.

That’s that for the topic and there’s one thing that I would recommend to you guys that you should always follow the forums and Reddit servers of your respective consoles(Nintendo Switch users should join the switch community across all the platforms.

Also, you can follow our Nintendo section where we cover such errors every time we get to know about the issue. peace out!

A lot of PS5 users have faced this issue of download error or 'queued for downnloads' where the PS5 fails to download the game. Fortunately, there are a few methods that you can implement in order...